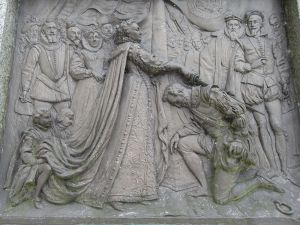 Gentlemen pirates like Drake are knighted by the Queen

Thanks to Rafael Sabatini and Hollywood, we have the popular image of the pirate captain as a heroic, and sometimes even noble figure. There’s something to be said about this when one talks about people such as Sir Francis Drake. But the Golden Age pirate captains were a common lot, and not known for their virtues. Oh, occasionally you run into the likes of Major Stede Bonnet, who was definitely a gentleman and not very good as a pirate captain. Or Edward England, who could so admire the fighting spirit of a merchant captain who fought against him that England set him free and let him go his way unharmed, instead of killing him as his pirate crew desired.

But those characters were exceptional. By and large, the only virtue pirate captains had was bravery in battle. They were thieves, plain and simple, leaders of thieving crews, capable of unreasoning violence.

And sometimes they were much, much worse. How bad? Consider the case of Ned Low.

Keep in mind that by the 1713-1730 “Golden Age of Piracy,” there were a lot of pirates who had served on merchantmen. They had not enjoyed the low pay or harsh discipline imposed by many captains. And they sometimes took vengeance on captains of ships they seized as prizes. They’d ask the seamen on that ship if the captain was a good man or bad, and treat him accordingly. Good captains often got their ships back, and even much of their cargo. Bad captains might be killed. 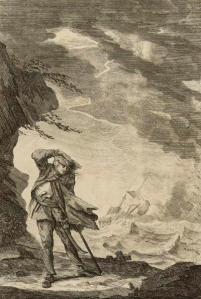 Nope, no oil portraits of Ned Low for some reason. Instead we have this engraving, which you would think is symbolic of what Ned did to commerce, but is really about an actual incident when a storm almost sank his ship

But this does not explain Ned Low. Ned seems to have combined innate viciousness with a lust for vengeance, and, to make matters worse, easily took offense. His career as a pirate captain began on May 28, 1722, when pirate captain George Lowther decided he would better be rid of a trouble causer like Ned, and turned over a new prize to him. That tells you something about Ned right there, that a pirate captain considered him too wild.

Many pirates would ransack the cargoes of the ships they captured, taking what they wanted, and sometimes casually destroying the rest. But that wasn’t enough for Ned Low. No, during much of his career as a pirate Ned preferred to set fire to the ships and destroy them and their remaining cargo. New England and Portuguese ships in particular got this treatment due to grudges Ned held.

Still, that was better than his treatment of the people on board of the ships he captured. He’d captured a French ship of 34 guns in July, but decided to scrap her after taking a pink (a square-rigged narrow-stern cargo ship) that sailed better. Apparently the French ship’s cook had been unsatisfactory, his cooking too greasy, because Ned had him bound to the mainmast before he burned the ship. The joke was watching the cook burn, to see if he was also too greasy.

Ned’s crew thought that stringing up people was entertaining

At least the poor cook wasn’t Portuguese. Low seems to have disliked them even more than the French. He captured a ship in August with Portuguese passengers. His crew delighted in stringing up two Portuguese friars to the foreyard mast by their arms until they were almost dead, bringing them down to recover, and then repeating this feat. One of the other Portuguese passengers on deck was disemboweled with a cutlass for looking sorrowfully upon the treatment of the friars.

On yet another occasion, Low took a Portuguese ship and tortured several of the men to find out whether there was money on board. There indeed had been, but the captain had tossed the money overboard, rather than let the pirates have it. For his pains, Low had the captain’s lips cut off and broiled them up as a delicacy right before the poor captain’s eyes. Only then did Low order the murder of the entire 32-man crew of the Portuguese ship. After all, one can only torture them before they’re dead.

Back in his early days, Ned had been a logwood man, cutting logs in the Bay of Honduras. Logwood men hated the Spanish, for the Spanish considered the Bay their territory, and often attacked the logwood men. So when Ned Low decided to pay a visit to the Bay in May of 1723 and captured a Spanish ship that had taken some logwood cutters prisoner, it is no wonder he decided to kill the entire Spanish crew. Some of the Spanish escaped by jumping overboard, but Ned ordered a boat out to hunt those men down and kill them. 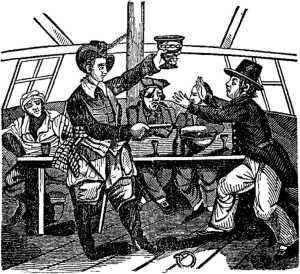 Ned on one of his “off” days: he actually gave the captain a choice between taking a drink or being shot. The captain drank.

About a month later, Low took a New England ship sailing from Jamaica. As I’ve said, Low had an animosity toward New Englanders because they had sent out ships to hunt him. So he took the captain and cut off his ears, slit his nose, and “cut him in several places of his body.” The next ship Ned took wasn’t from New England, but Ned decided to torture the crew anyway, Besides the usual slashes with a cutlass, he had burning matches tied between their fingers to burn away the flesh.

After barely getting away from an encounter with a Royal Navy ship, Ned became even more vicious. He had the captain of the next ship he took whipped naked around his deck before cutting off his ears. Only then did he kill the captain and sink his boat. (The crew survived.) He was a bit more lenient with the next boat he took, only cutting off the captain’s head. But then he returned to his usual habits. One particularly unfortunate captain had his ears cut off and then was forced to eat them. At least he got to season them with salt and pepper.

In short, Edward Low was no gentleman. Did he have any redeeming features? Well, yes, one. He’d apparently been happily married to a woman who died in childbirth. Supposedly that was one reason why, when he needed more crew members, he preferred to force single men and not married ones. And that’s the whole of Ned Low’s virtues.

Curiously, we don’t know what happened to Ned. One account has him hanged by the French, another that he was deposed by his crew and marooned on an island where he died. Frankly, I think a fitting end would have been for him to end up the victim of cannibals.

23 thoughts on “As low as one can go: the pirate captain Ned Low”