Yesterday, we agreed to sell my parents’ house. Over the next few weeks, we’ll dispose of the furniture, dishes and cutlery, books and VHS video tapes, and other sundries that remain. Soon, all that will be left of my parents are their names, photographs, and a few possessions each of us children took away.

In many ways, that house was their lives. It was the third house they owned together, and was meant to be their last residence. Some of the furnishings had been with them as long as I can remember. There are bowls in that house from which I ate breakfast cereal as a child. And almost every square foot of the house was ornamented with knickknacks they had picked up in their lives: souvenir spoons, reproduction art work, even a collection of delicate china cups. If anyone ever drank out of those cups, the occasion escapes me, but my mother valued them and always had them on display in each house that was her home.

They’d moved to that house, a “mobile home” (although it wasn’t mobile, really), to secure a financially stable retirement. Which they did: so long as they lived there, their expenses were less than their income. They were able to live out their retirement without constant financial worries, without dipping into capital except to buy a car every so often.

They expected to die in that house. Having been generally healthy most of their lives, they hoped to remain that way until their death. Fate was not that kind to them. My father spent the last few months of his life in a nursing home, afflicted with various ills that made even eating difficult. My mother fell and seriously injured her back, and so had to spend her last two years in an assisted living facility. 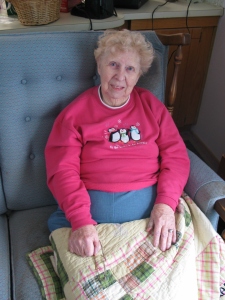 During those last two years, I would visit her every week. And, if she were feeling up to it, we drove up to that house, and she spent a few hours sitting in her living room. As far as she was concerned, that was still her home, and rarely did a week go by that she didn’t suggest that she ought to move back there. What could I tell her? That she had physical problems that required the help of another person often enough, that her cognitive skills had declined to the point that we couldn’t trust her to take her medication? That it would be a disaster? So I temporized, and put her off, and let her hope. I still wonder if that was the right thing to do.

When she first moved to the assisted living facility, I remember walking through the house. With the detachment of a professional historian, I marveled at how fascinating it would be to simply preserve the house as is, leave this way for a few centuries, to let future historians delve into its contents, to give them the physical household of a working class couple circa 2000. However, even then I realized that much would be a mystery to those historians. Without my parents alive and living there, so much of the personal content would be meaningless. What would they make of the stuffed kiwi bird toy sitting on the top kitchen shelf? No way could they guess how that came to be there.

I have only a few more times to walk through it now. Those will be the last I see of many old familiar possessions. Some I’ve not seen in years, hidden away in cupboards. Some I saw every time I visited. Some bring back memories; some don’t. It doesn’t matter. We have no room for them, so they must go. The new owner will get a house stripped of its furnishings, of its memories. He can build new ones, if he wants.

And my parents’ last household will be gone. In a lot of ways, it’s like saying goodbye to them all over again. Silly. These are just things they owned, not the family members I loved. And yet, and yet, I can stand in any room and bring back memories of them. For a few more days. And then never again.

23 thoughts on “History can be personal, too”