One can tell a lot about a culture by the values it celebrates. For the Vikings, one key value was honor. As shown in Egil’s Saga, honor is a complicated matter, depending not just on what one does, but who one is, and who else one deals with. 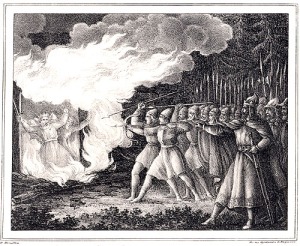 Although Egil thought burning people in their houses an honorable course, later Icelanders would condemn the practice as dishonorable, as in Njal’s Saga. (Depicted: the burning of six kings by legendary Swedish king Ingjald, an 1830 book illustration by Hugo Hamilton (1802-1871).)

As you might expect, Vikings could win honor in battle or raids. It makes sense. Go on a good raid, fight a lot of people, take a lot of treasure in booty, and you win honor. Egil Skallagrimsson, the eponymous hero of the saga, was a Viking who took these matters to the extreme. In chapter 46, he led a party that robbed a farmer of all his treasure. But for Egil, that was not enough. He said that was a poor form of honor, that to win proper honor, the Vikings needed to let the farmer know that his treasure has been taken. And how did Egil let the farmer and his family know? Why, by burning down their house and killing anyone who tried to escape. That’s a hardcore Viking for you.

Fighting in battle also qualifies as an honorable occupation. Egil and his brother Thorolf helped lead King Athelstan’s army to victory in chapters 52-55. Athelstan honored Egil with recognition of his favor . . . and two chests full of silver.

And there are duels. Vikings used duels to settle many disputes, including disputes at law (see chapter 57). Egil even intervened in another family’s dispute to fight a duel. A man named Ljot wanted to marry a girl whose family refused him, so Ljot challenged the girl’s brother, Fridgeir. The idea was that if Ljot killed Fridgeir, that he would win the girl’s hand anyhow. Nice idea that, that one might have to marry a man because he killed your brother! Egil was staying with Fridgeir, who has been an exemplary host, and when he found out what was going on, Egil offered to challenge Ljot. Well, when they arrived at the site chosen for the duel, Ljot agreed to fight Egil instead of Fridgeir, because Ljot thought Egil a more worthy and tougher opponent. Ljot figured that if he killed Egil, he would win more honor than killing the younger, weaker, and less famous Fridgeir. In case you have to ask, Egil killed Ljot.

Egil had a long track record of killing people. He believed, along with most Vikings, that revenge was honorable. As in so many things, Egil was a bit extreme. When he was seven years old, he killed an eleven-year-old over a dispute at a ball game (chapter 40). Good thing Egil wasn’t in the NFL during “Deflategate!” 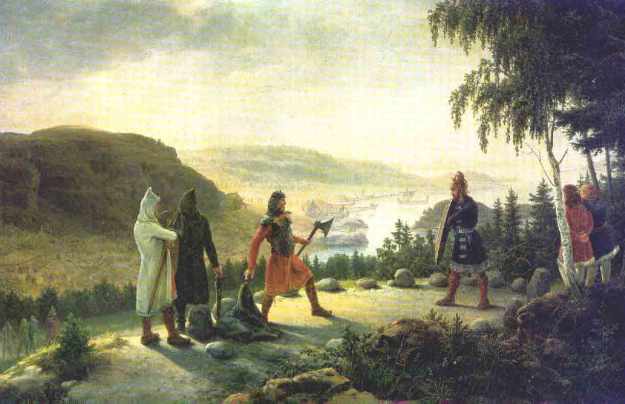 On another occasion, Egil challenged Berg-Onund to a duel over a disputed inheritance when he couldn’t get satisfaction by litigation. Painting by Johannes Flintoe (1787-1870)

If being a good fighter is something we expect of Vikings, being a good poet is not. Yet Egil was a noted poet, and several of his poems are recorded in the saga. (Although there’s some argument about whether they are genuine compositions of Egil’s.) His first recorded notable poem (chapter 31) was delivered at age three! So much did the Vikings honor poetry that King Eirik Blood-axe, who had many reasons to have Egil executed, spared him after Egil composed a drapa, a long complicated poem celebrating heroic deeds, in honor of Eirik (chapters 60-62).

Another worthy way of gathering honor among Vikings was to be generous. Equals were generous to each other (chapter 68). Wealthy, powerful men, such as Egil’s uncle Thorolf, generously supported many followers (chapter 9). Kings who made generous gifts were held to be honorable, as Athelstan did to Egil (chapter 55). Indeed, if you gave a worthy gift, you not only gained honor, but the recipient gained honor as well. Consider Egil’s uncle Thorolf. He built a magnificent longship that was so much better than King Harald Fairhair had that the king became jealous of Thorolf. Thorolf realized that he was slighting the king by appearing to be better than him, so gave the king the longship as a gift (chapter 11). Harald was pleased, and both men gained honor. 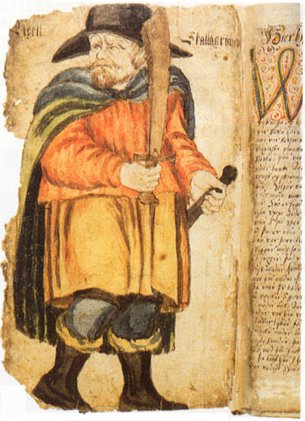 Warrior, poet, and sometime heroic spewer of vomit, Egil was a Viking through and through

That last exchange demonstrates some of the dangers of the Viking code of honor. It was not wise to gain more honor than one’s superiors. Thorolf made that mistake, and while his gift of the ship temporarily solved the problem, ultimately his success led to King Harald Fairhair having Thorolf killed (as detailed in the chapters up through 22). And it wasn’t considered good form to act honorably and obviously expect to be praised for it. Late in his life, Egil received a wonderful shield from his friend Einar (chapter 81). What’s Egil’s first reaction? He was insulted that Einar left the shield because Egil thought Einar expected Egil to praise Einar and the shield in a poem! Egil wanted to go after Einar and kill him! Only after he learned that Einar was far away on his ride home did Egil regain his temper . . . and compose a poem about the shield and his friend Einar!

There’s a lot more to be said about Viking honor in Egil’s Saga. But I hope these few examples give you an idea of the range of Viking honor, and the complexity of the society that measured honor in these way.