One of the odder features of Capt. Charles Johnson’s A General History of the Robberies and Murders of the Most Notorious Pyrates is that when it was expanded to two volumes in 1728, Johnson (whoever he was) included a chapter on what appears to be an entirely fictional pirate, Captain Misson. Even more confusing, Johnson has Capt. Misson meet with the real pirate, Thomas Tew, whom you might remember from class sailed with Henry Every on his last voyage. And to complicate matters further, Misson’s story contains internal references dating it to 1707, yet Tew died in 1695! What’s going on here?

Strange though it may seem, Johnson is actually working within an established story telling tradition, that of the fanciful utopia. Medieval peasants had their Cockaigne, a land not of hardship but plenty, with peasants in charge instead of nobility, and freedom from sexual restrictions. It was the normal world turned topsy-turvy. 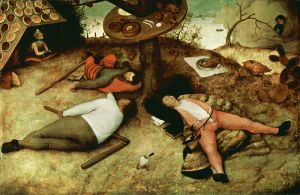 An unflattering view of Cockaigne, emphasizing those well-known pirate virtues of sloth and gluttony

The discovery of the New World was a shock to Europeans. They thought they had known everything! However, once reports began trickling back from the New World, Europeans were intrigued by how different society was there. To them, it seemed that the Native Americans lived in a paradise, quite different from Europe. And so, combining elements of the New World and Cockaigne, European writers began developing stories about imaginary realms in far-off places where the normal (European) social order was inverted. Probably the best-known examples are the fanciful realms of Jonathan Swift’s Gulliver’s Travels (1726) and the isolated native kingdom visited by Candide in Voltaire’s 1759 eponymous story.

This is the purpose of Johnson’s chapter on the fictional Captain Misson. Johnson drew on the legends about Henry Every’s mythical Madagascar kingdom, and the reports he had about how the pirates treated each other as equals, to have Misson found a fanciful pirate utopia on Madagascar. This colony of Libertalia is governed by reason and kindness. It has no religion, because a priest has converted all the pirates to skepticism. Misson and his followers recognize no authority other than their own, accepting no king, though they vote to make Misson their leader for a time. Johnson makes Libertalia sound like paradise, a paradise that criticizes European society by inverting its rules.

Although it’s a fiction, Johnson tried to anchor Libertalia in reality by providing many plausible details about the life of Captain Misson and his career in the French Navy before he becomes a champion of liberty. And that is no doubt why he connected Misson to Tew. Tew was a known historical figure. If Tew interacted with Misson, Misson had to be real, too! 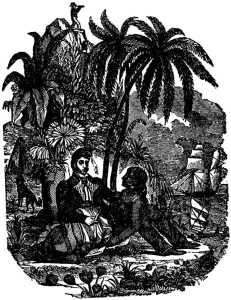 Paradise may not last, but it can sure be fun. It has to be said in Johnson’s favor that the pirates and natives treat each other as equals.

Yet the pirate utopia on Madagascar was a pipe dream, nothing more. Johnson has Misson die, and Libertalia fail, as his way of ending the fantasy. And in reality, when Captain Woodes Rogers (of whom we shall hear more) visited Madagascar in 1714, he found that the pirates there were a few wretched survivors, living at the sufferance of the native chiefs.