To catch up on how popular culture represents Vikings (and no, Marvel movies featuring Thor don’t count . . . well, they shouldn’t), I sat down the last few weeks to watch the History Channel’s show Vikings, first broadcast in 2013, and now scheduled for a fourth season. I was able to get hold of only the first season on DVD, so that’s mostly what I’ll talk about here. Bottom line, if you want to skip the rest of the review: so-so entertainment, so-so history, but useful for all that, and the series does have its moments.

The History Channel has had some dubious times, having swung from the “Hitler channel” due to the prevalence of World War II features, to exploring the fringes of the alien UFO theories. My expectations for this series were appropriately low. And right from the first episode, there were historical howlers. Was I really supposed to believe that the Norsemen had never sailed west before? Or that they stumbled on Lindisfarne monastery simply by chance? I won’t even get into the outfits, which one historian described as more appropriate for a leather fetish bar in the 1980s. Why is it that historical dramas about rough men love leather so much? Okay, stupid question.

And then there’s the pacing. One can see the struggle between Ragnar and Earl Haraldson shaping up from the get-go, but it takes six episodes to come to a climax. Doesn’t sound so long? The Earl’s been killing Ragnar’s allies dishonorably since episode 2. The show wants us to think Ragnar is some wise, far-sighted man, and Travis Fimmel, the actor who plays him, can sometimes make me believe, but he’s a pussy for putting up with friends and family being killed as long as he does. 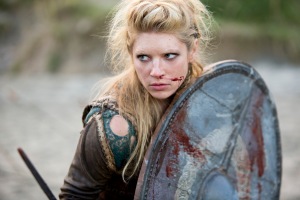 I should be putting a picture of Rollo here, but I don’t care about him. Instead, here’s the improbable warrior Lagertha, who’s also Ragnar’s first wife

A large part of the problem is TV’s tendency to turn historical dramas into soap operas. I first noticed this in the HBO series Rome, which should have been called Desperate Roman Housewives. The producers of these series think that the way to hold our attention is to drag every major character into labyrinthine plots. For example, Ragnar’s brother Rollo is simultaneously envious of his brother, carrying a torch for his brother’s wife, considering betraying his brother to whichever powerful man offers him a deal, bedding Earl Haraldson’s widow, and banging anything else in a skirt that he can reach. It’s all supposed to create dramatic tension and develop Rollo’s character. But it’s all so unreal in its relentless complexity that I end up not caring about Rollo at all. In fact, by the time I finished watching the first season, he was just “the irritant who’s supposed to make Ragnar’s life more complicated.” And the same could be said for many another character.

And yet . . . in between the de rigueur battle scenes and the plot complications, the characters do actually get some chances to develop. Ragnar’s pseudo-wise silences don’t impress me, but his battle smarts in setting up battles to favor his side do. His romance with a woman other than his wife and his son’s unfavorable reaction to this don’t move me, but Ragnar’s way of dealing with his son’s disapproval does.

And probably the most affecting moment in the entire first season is a side show to the main event: not the duel between Ragnar and Earl Haraldson, but the funeral afterwards. Ragnar’s willingness to honor his foe and the grief of Siggy, Haraldson’s widow, provide some genuine emotion, because they are human reactions to events that don’t seem contrived. It’s not Euripides’ The Trojan Women, but the episode exists for the same reason: human grief is real and understandable.

Siggy’s usually a throw-away character, but here she’s an essential part of the funeral episode

But what of the history? Again, Rome provides a reference. The series took painstaking care to get some details authentically correct, while doing great violence to the actual historical events and people. And Vikings is doing much the same, by reweaving history to make what the producers think is a more dramatic story, blending the authentic (e.g., the raid on Lindisfarne) with the inauthentic (e.g., the church at Uppsala). In both cases, just viewing the episodes won’t tell you what’s accurate or a guess or anachronistic or simply wrong.

Yet, in both cases, the series can provide an entry to learning more about history, so long as you start with the question “Was it really like this?” Did the Vikings really worship their gods at a church like the one shown in episode eight? Well, no. But then where and how did they worship? At that point, the historian and folklorist and archaeologist can step in and provide some answers. Most viewers won’t even get that far. But let’s treasure and encourage the ones that do, and help others along the same path.

My own interest in the Vikings began with watching the movie The Vikings from 1958. It was like the TV series, accurate in some details, but doing serious violence to the history. The Vikings started me on the road to trying to find out what the Vikings were really like. I hope Vikings will do the same for others.

That’s Ernest Borgnine on the left, playing the 1958 version of Ragnar. Janet Leigh gets to play an ornament . . . oops, sorry, a princess. This one’s no warrior-princess.